From 1 to 4 September, the players in the world of cycling and urban mobility enjoyed the return of the Eurobike show after a year's absence due to the pandemic. It was an opportunity for Overade, which was exhibiting its safety products for urban mobility, to take stock of the trends and orientations of the market and also of ecological policies. 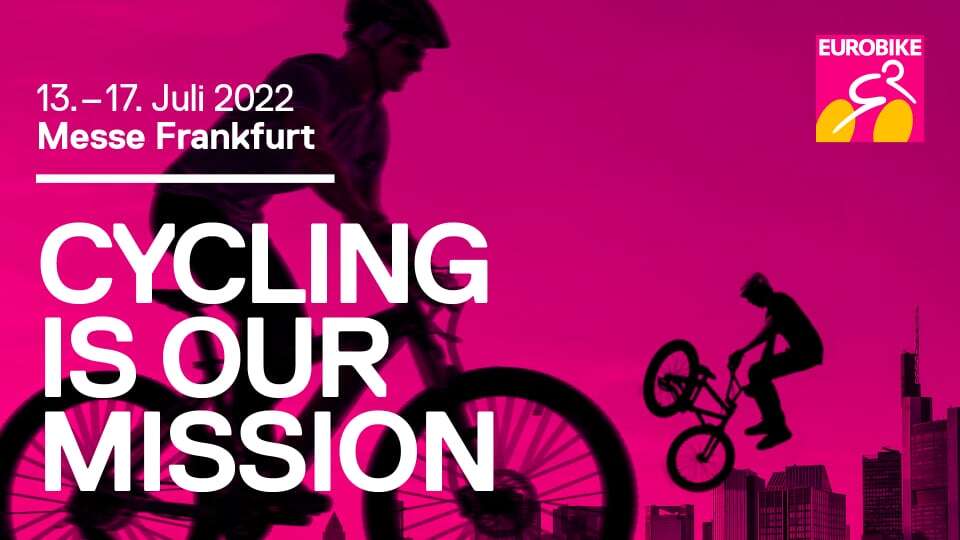 As the undisputed leader in the cycling sector, the German Eurobike is the trade fair that brings together the most cycling professionals.

Over the years, Eurobike has become the most important annual meeting place for the bicycle industry. It provides an opportunity to meet, exchange ideas and forge new partnerships.

Eurobike is the ideal opportunity to reveal its new products and innovations.

For its last edition in the bucolic setting of Friedrichshafen, the show welcomed 772 brands from 41 countries around the world. Next year, Eurobike will take up residence in Frankfurt, which will offer greater transport and accommodation facilities.

• 4 days of discussions, conferences and workshops where the most important actors of the bicycle industry meet with carefully selected experts around micro-mobility, safety, ecology or the evolution of the bicycle since the pandemic...

• The Eurobike Awards, prizes awarded by cycling experts in over 13 categories.

• The Green Award and Start-up Award once again highlighted innovations aimed at preserving and saving resources as well as promising ideas from young companies.

Climate change, caused mainly by man and his behaviour, is one of the most alarming issues of the 21st century:

• Accelerated water rise: In the 20th century, water rose by 1.8 mm per year. Today, the annual level of water rise is 3 mm.

• The year 2020 was the warmest year on record for the world. +1.28 degrees were recorded during this year and this increase is expected to accelerate in the coming years.

• 36.8 billion tonnes of CO2 will be emitted in 2019. According to a study published in the European Heart Journal, these emissions would cause the death of 800,000 people in Europe each year and 9 million people on Earth.

Transport is an important part of climate change. In France alone, 42% of greenhouse gas emissions are produced by this sector of activity. Another sobering fact is that 75% of home-to-work journeys are made by car (often with only the driver in the car) compared to only 8.5% on foot or by bicycle. 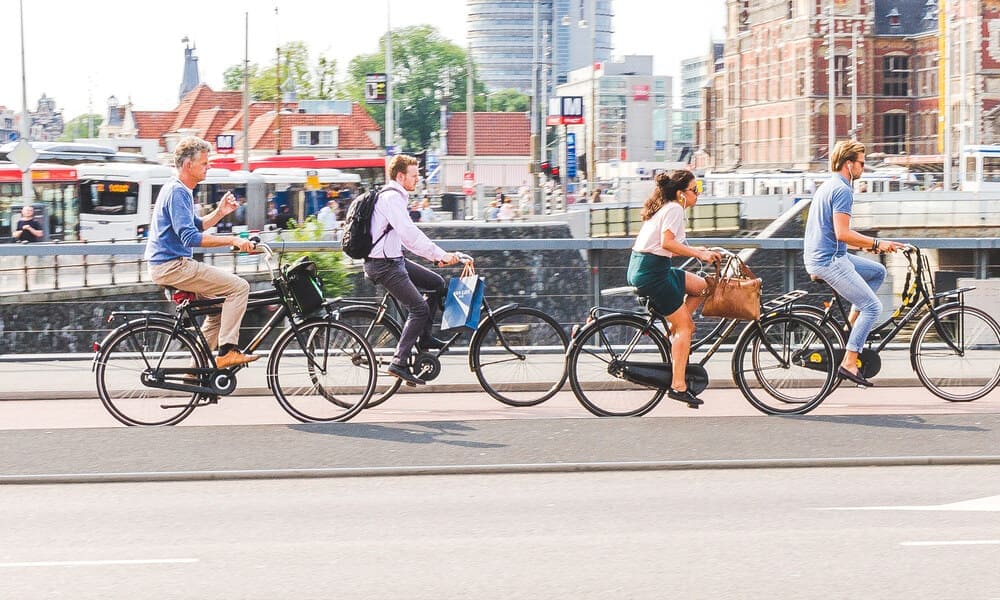 In Europe, 22 million bicycles were sold last year. A record for the past twenty years.

The cycle industry has reached a turnover of 18.3 billion euros in 2020, according to the Confederation of the European Cycle Industry.


Germany saw its number of bicycle sales soar in 2020, with an increase of 16.9% compared to the previous year.

The electric bicycle is the new favourite means of transport for Germans, far ahead of France.

44% of our German neighbours use bicycles regularly, i.e. about 1 in 2 inhabitants, according to the Ministry of Transport.

To adapt to this boom, the Ministry of Transport is now funding seven university chairs in "cycle traffic management" in order to "train specialists who will know how to build and manage an ideal traffic system for cyclists", explains Jana Kühl, a doctor of geography and lecturer at the Ostfalia University in Salzgitter.

In London, overcrowded carriages and exorbitant rent prices mean that the famous underground is no longer popular with the inhabitants of the British capital. Add to this the effects of the pandemic and the Underground is giving way to the inexorable rise of cycling. The British Parliament has therefore released £250 million to build cycle paths. For good measure, London Mayor Sadiq Khan has announced the multiplication of car-free zones to encourage millions of trips on foot or by bike in complete safety while limiting air pollution.


Paris is no exception. The city council is constantly adding to its measures to make the bicycle THE preferred mode of transport. The pandemic has also accelerated the introduction of new cycle paths.

The French government has introduced a €20 million support package. 20 million package of support measures, including the construction of more cycle parks, the addition of 650 km of new cycle paths to the existing fleet, and an increase in secure cycle parks. The introduction of the "Coup de pouce vélo" operation also provides additional support for individuals. 50€ are offered for bike repairs or "refresher" training.


Brussels is among the capitals that are rethinking their mobility plans. The municipality has set itself the objective of making cycling easier, safer and more natural for everyone by adapting a number of facilities. For a year now, the Belgian capital has limited its residential areas to 20km/h and its main roads to 30km/h. This decision, taken after the containment, allows pedestrians and cyclists to have priority and to be able to circulate over the entire width of the road.

Italy, for its part, wishes to encourage its citizens to use bicycles. It is therefore providing a state-funded programme to help households acquire electric bicycles and bicycles (VAE: Vélo à assistance électrique). The financial aid is intended for residents of towns with more than 50,000 inhabitants. A bonus of €500 is granted under certain conditions.

Bicycles and electrically assisted bicycles are a sporting, ecological and healthy solution

Marked by the health crisis caused by Covid-19, the year 2020 has turned our way of life upside down and has pushed users to take up cycling.

For the past year and a half, we have had to adapt and live with the virus. For several million people around the world, cycling has become a barrier. Indeed, the risk of contagion by bicycle is very low, social distances are respected and public transport is decongested. Cycling is also a way of limiting car journeys and the toxic particles that are emitted.

Isabella Annesi-Maesano, director of the department of epidemiology of allergic and respiratory diseases at Inserm, explains: "Pollution damages the mucous membranes of the respiratory tract and lung, which makes it easier for viruses to penetrate and, by aggregation, fine and ultrafine particles carry the viruses deep into the airways.

The pandemic has also generated a craze for electrically assisted bicycles (EABs). With more than 500,000 units to be sold by 2020, the EAB is on the rise in France.

Lazy bike, too heavy, too expensive, polluting... All these preconceived ideas about the EAB are no longer blocking arguments. Beyond the ecological and health aspects, the EAB is also the ideal way to get to work easily while remaining presentable. Indeed, riding an electrically assisted bicycle reduces perspiration by 2/3 - a considerable advantage for many cyclists!

The assistance also makes it possible to extend journeys in the city and cover 2/3 of the average distance travelled by a car while exercising. Researchers at the University of Basel claim that the role of the electric bicycle in promoting fitness and health is comparable to that of the conventional bicycle. The bending and stretching movements of the legs still put a strain on the muscles as well as the joints and blood circulation. An excellent option for anyone who wants to exercise gently!

Since July 2021, in France, you can benefit from the bike bonus to finance the purchase of an electrically assisted bike. The bike bonus can cover up to 40% of the cost of purchasing this type of vehicle, subject to a ceiling of €1,000. See the conditions

What can we learn from the Eurobike show in terms of innovative products?

After a long year marked by the pandemic, Eurobike came back in force with a host of products that we would like to offer ourselves.

Whether it's a two-wheeler or a three-wheeler, the cargo bike continues to break records... 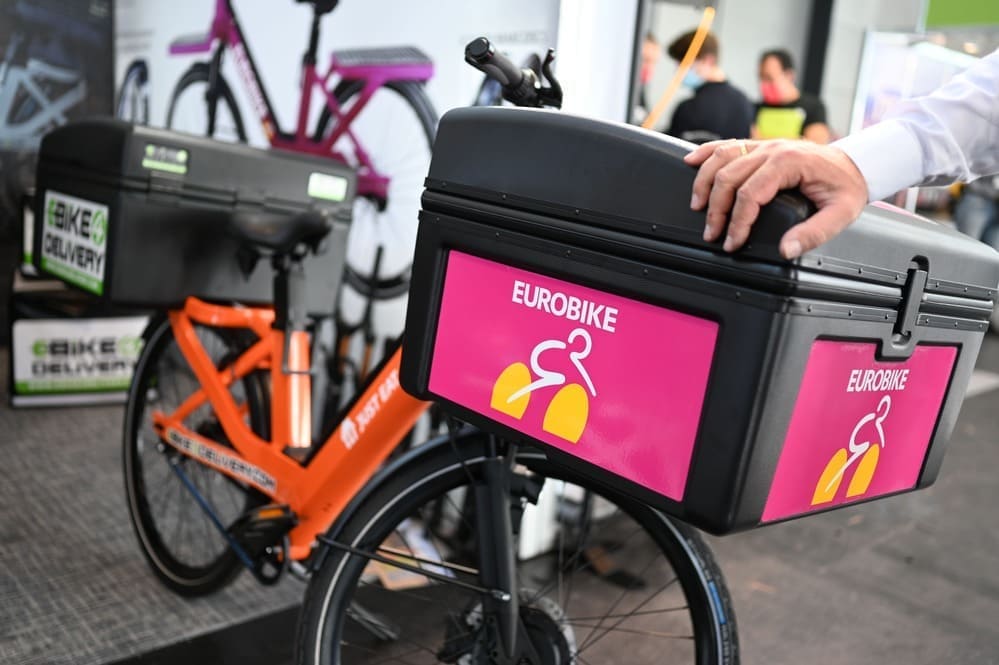 The cargo bike is THE phenomenon of the last few years. In 2020, sales soared by 354% to 11,000 units in France. In Europe, nearly 43,600 cargo bikes were sold in the same year. This craze was evident at the European Eurobike show. For its 29th edition, 3 brands of cargo bikes were rewarded with Eurobike Awards.

For a long time used by individuals, cargo bikes are now very popular with companies. The Italian bike SUM-X was awarded for its innovation. With its rear platform, it ensures a stable ride and optimal weight distribution. Inspired by the automotive industry, it is designed for so-called "green" logistics. It optimises travel time while improving delivery time, ensuring load capacity and zero environmental impact. 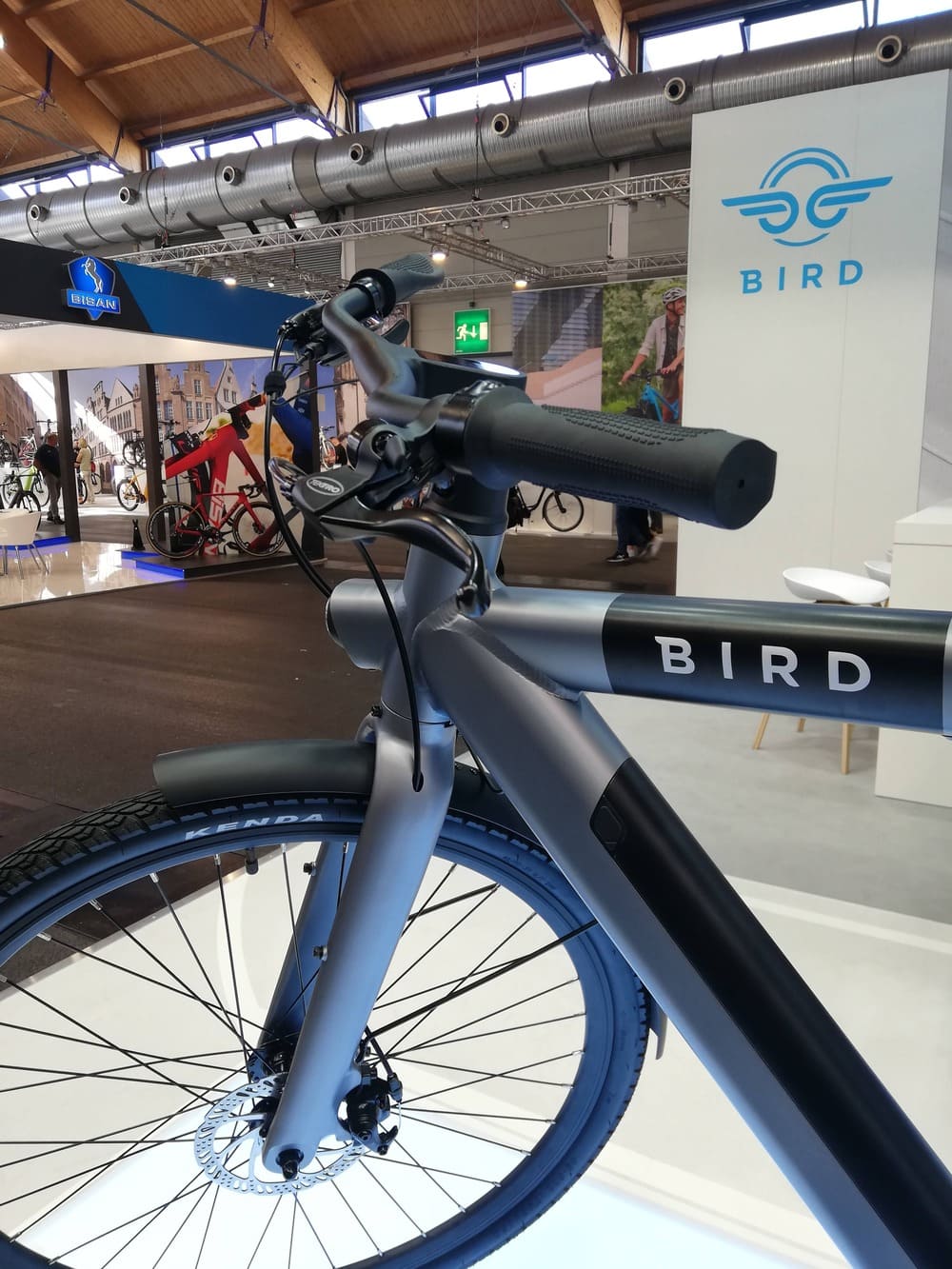 A leader in the micro-mobility industry, the American company Bird is known for its fleets of electric scooters deployed around the world.

At Eurobike 2021, Bird revealed its latest addition: The Bird Bike, an electric bike available for sale next year.

"With our new electric bike, specially designed to meet European specifications, we aim to further accelerate this evolution with a vehicle that is safe, durable and offers stylish design and advanced technology," said Bird CEO Travis VanderZanden.

Built to ensure safety, comfort and reliability, the Bird Bike is packed with features thought up by engineers, electric vehicle experts and designers:

Overade and its BLINXI flashing light for bicycle helmets, an essential for urban mobility

The rise of micro-mobility raises questions about safety. According to the Paris police prefecture, 919 cyclists were injured or died in road accidents in 2020, compared with 680 in 2019. 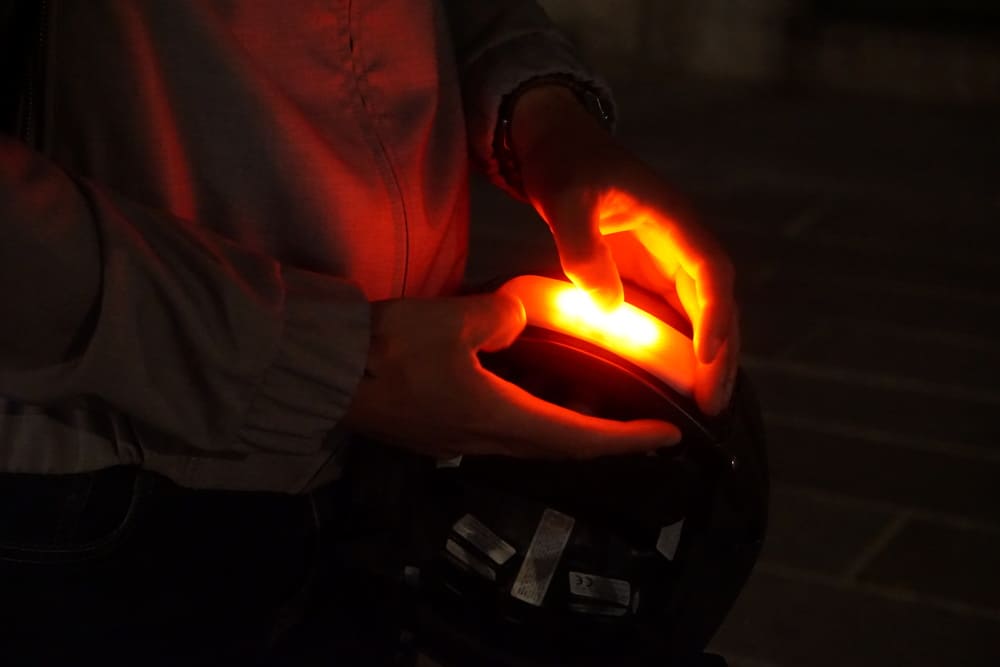 These figures are prompting more and more companies to find ways of making cyclists as safe as possible. This is the case of our company Overade, a French company specialising in the sale of bicycle helmets and accessories. When designing its products, in particular the BLINXI bicycle helmet flashing light, the company makes a point of offering innovative products of French design for urban cyclists.

Focus on some of the winners of the Eurobike Awards 2021

Since 2007, Eurobike has presented the Eurobike Awards. In a multi-stage selection process, products and innovations must stand up to the critical scrutiny of a panel of experts and are put to the test. For many companies, the AWARD ceremony and the accompanying prize are a foretaste of a successful product launch.

• In the Startup category, the Evari 856 E-Bike was the lucky winner. "The entire panel was inspired by the design and contours: the Evari electric mountain bike impresses with its uniquely shaped carbon monocoque frame. A Kiox screen mounted on a carbon panel is embedded in the slightly curved top tube. The bike evokes a very special emotion: "It's like driving a Porsche", according to the juries present.

• The Gold Winner 2021 in the category Clothing and Accessories is the Raijn suit from TexLock. It is a multi-functional rainwear that changes from a rain jacket to a wetsuit in seconds. The jury described it as the most innovative, stylish and functional garment.

• Awarded in the E-Bikes category for its practicality and innovation, the CARGOLINE FS 800 cargo bike is the latest addition to the Kettler range. Beyond its aesthetics, the bike offers exceptional functionality. Starting with the ELIAN steering system combined with a suspension just below the loading area and at the rear. Then the handlebars designed by KETTLER Alu-Rad adapted to all morphologies. Finally, the award-winning suspension seat post with dropper function. 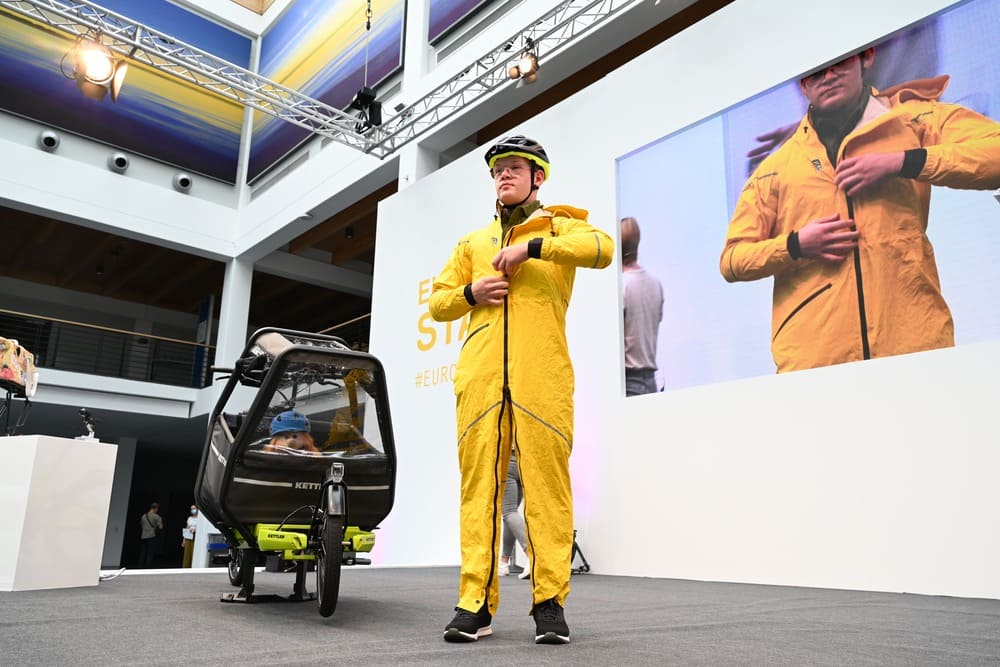 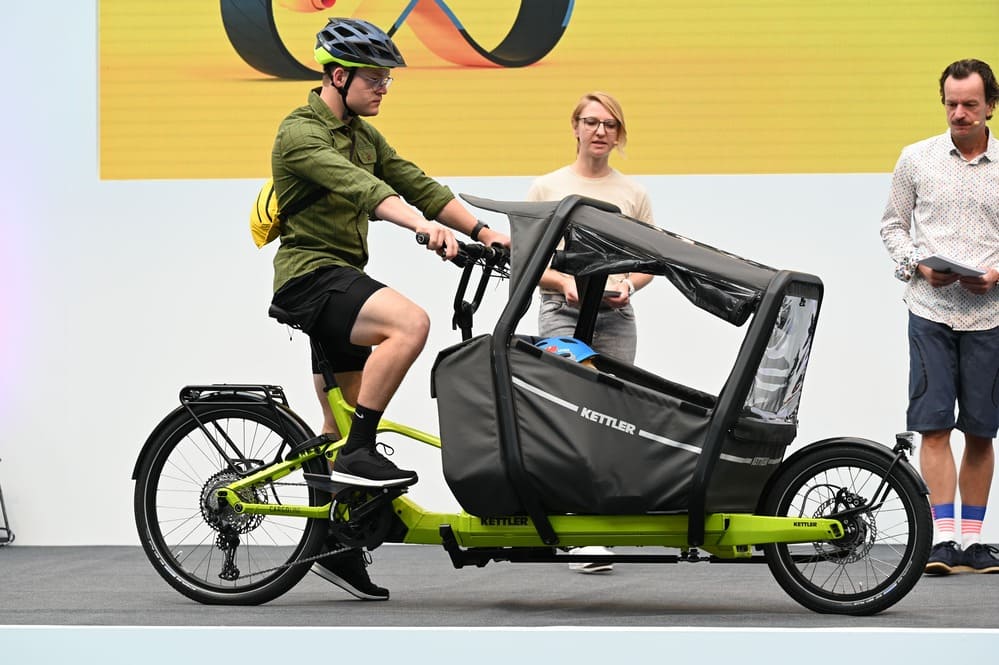 From 2022 onwards, Eurobike will move from Friedrichshafen to the Frankfurt metropolitan area, where the transport and accommodation infrastructure will provide a new dynamic, reflecting the growing importance of the bicycle in our daily lives.

Boosted by electric assistance and products related to comfort and safety, the bicycle is making a lasting impression on the world of transport, both for individuals and for professionals.

This year at Eurobike, the bicycle once again demonstrated that it is a modern form of transport for the future !